One of the new Seven Wonders of the World

Recently voted as one of the new 7 Wonders of the World, the ruins of Chichen Itza lie about midway between Cancun and Merida, so that the journey from each city takes around 2 or 3 hours via the toll highway. It is possible to see the main structures on a day trip from Cancun, and many tour buses do just this resulting in a large influx of visitors around 10-11am. Chichen Itza is the most visited site in the Yucatán and it can get very crowded here, so if at all possible try to arrive soon after the 8am opening. This will give you time to explore the site before it gets too hot. Alternatively, leave your visit until later in the day and stay overnight nearer the site, returning in the early morning. Ideally, you will need two days for a good understanding of the site, which covers 4 square miles.

Admission charge to the ruins is around 15 US dollars. The evening sound and light show costs around 5 dollars . The show usually starts at around 7.00pm, but we’d suggest you re-confirm the time when you arrive. Your ticket permits re-entry on the same day only.

At the entrance to the site is a large visitors’ complex, with cafeterias, restrooms, bookshops and a small museum. There are also models of the layout of the site. It’s useful to remember that there is a second refreshment shop with toilet facilities by the cenote.

Chichen Itza has been widely studied, and excavated and restored more than any of the other Mayan cities. Yet its history is still clouded in mystery and there are many contradicting theories and legends. It is clear that a large Mayan community thrived here between around 700AD and 900AD, and built most of the structures in the southern area. However, the main buildings in the central area, including the Pyramid of Kukulkan, the Temple of the Warriors and the Ball Court, are Toltec in design and influence.

The Toltecs originated from Central Mexico, and one respected theory suggests that the Toltecs invaded Chichen Itza and imposed their architectural style on new constructions. Alternatively, we know that the Maya traded extensively and it is possible that they were influenced by the Toltecs in their own architecture. Another more recent theory claims that Tula, capital of the Toltecs, was actually under the domination of the Maya, resulting in a transfer of style from one city to another. There are fragments of evidence to support each line of thought, but no conclusive evidence for any single theory.

Compounding the mystery are ancient legends passed down through the Mayan tribes and also the Toltecs. According to Toltec history, in 987AD the legendary ruler Quetzalcoatl was defeated and expelled from Tula. He was last seen leaving from the Gulf coast on a raft of serpents. However, in the same year, Mayan stories recorded the arrival of a king named Kukulkan, the Serpent God, whose return had been expected. Kukulkan defeated the Mayan city tribes, and made Chichén Itzá his capital.

The Pyramid of Kukulkan Towering above the other buildings at 79 feet (24 m) high, the Pyramid of Kukulkan has a structured feel about it. Two of its sides have been completely restored, the other two were left to show the condition before work commenced. Each side had originally 91 steps, adding the platform at the top as a final step there are 365 in total one for every day of the year. Further evidence that this building was linked to the Mayan interests of astronomy and the calendar is demonstrated at the spring and autumn equinox. On these days the shadow of the sun playing on the stairs causes the illusion of a snake processing down the pyramid in the direction of the cenote. Naturally, it’s an impressive sight, and there are usually thousands of people on the site at these times. It’s quite a climb to the top, but once you’re there you’ll have a terrific view of the rest of the ruins. The temple at the top of the pyramid has carvings of Chac, the rain god, and Quetzalcoatl, the serpent god. As at Uxmal, this temple was built over the top of an original structure and at limited times of the day (check at the entrance) you can enter the old temple via a passage under the northern stairway. Inside you’ll see a sculpture of a jaguar, painted red and with jade eyes, exactly as it was discovered.

The Ball Court (Juego de Pelota) From the Pyramid of Kukulkan, head north-east to the Great Ball Court, the largest of its kind in the Maya world. There are eight other much smaller ball courts at Chichen Itza and more in other Maya cities, but this one was deliberately built on a much grander scale than any others. The length of the playing field here is 40 feet (135 m) and two 25 feet (8 m) high walls run alongside the field.

The game itself involved two teams, each able to hit the ball only with elbows, wrists or hips, and the object was to knock the ball through one of the stone hoops on the walls of the court.

Look at the carvings on the lower walls of the court and you will see that this was not a casual sport there are clear depictions of one team member with blood spurting from his headless neck, whilst another holds the head aloft. Some people think the captain of the losing side was executed by the winner; others suggest that the winners earned an honorable sacrifice. No-one knows for sure. It is said that the game was used either as a method of settling disputes, or as an offering to the gods, perhaps in times of drought. Only the best were selected to play, and to be sacrificed in this way was a great honor.

Imagine, then, the significance of this giant court, where the goals are 20 feet (66 m) high and the court is longer than a football pitch. The acoustics here are superb – a low voice at one end of the court can be heard clearly at the other end and the atmosphere during a game must have been electrifying. It is said that only the noblest could attend the court itself, the general population having to listen from outside.

Sacred Cenote. Before you reach the Group of the Thousand Columns, you will see a pathway heading north, just by the Platform of Venus. This is actually the route of an ancient sacbe, and leads to the Sacred Cenote. A cenote is a sinkhole in the limestone bed, accessing an underwater river. These cenotes were very important to the Mayans as their main source of water and had great religious significance. Here you will see a deep almost circular hole with steep sides and murky green water beneath.

There are stories of sacrificial victims being thrown into the cenote, along with offerings of treasure. In 1901 an American, Edward Thompson, bought the land around the site and proceeded to dredge the cenote. He found jewelry, pottery, figurines and the bones of many humans, mostly children. An international dispute arose when he shipped the findings to the Peabody Museum at Harvard, where some still remain (the remainder have since been returned to the Mexicans). The evidence, however, was inconclusive as it was feasible that children were most likely to fall into the cenote during play rather than as a deliberate act of sacrifice.

A stroll to the cenote is a pleasant diversion from the ruins and makes an ideal refreshment stop there is a small café/shop nearby and restrooms are available.

Group of the Thousand Columns. After visiting the cenote, head back towards the Group of the Thousand Columns. This complex incorporates the Temple of the Warriors and a series of columns, some of which feature carvings of Toltec warriors. It is believed that the columns originally supported a thatched roof which may have been used as a market place.

The temple itself displays another aspect of Toltec architecture the use of ‘Atlantean figures’, or statues supporting the altar. Here the statues are of warriors, each with the appearance of a different racial type. It is unclear as to whether these designs were accidental or whether the Maya were really aware of the diversity of the human race.

Look also for the large Chac Mool sculpture, again a feature of Central Mexican rather than Yucatecan design. The reclining figure holds a bowl, awaiting some sacrificial offering.

The Caracol. From the central plaza, take the path to the southern area of the ruins. This is thought to house the oldest constructions, and is predominantly Mayan in design.

The Nunnery (Edificio de las Monjas) and the Church (La Iglesia), both erroneously named by the Spanish, are in relatively poor condition. Look for depictions in La Iglesia of the four bacabs; these creatures (the crab, armadillo, snail and tortoise) were believed to be responsible for holding up the heavens.

The most impressive structure is the Caracol, named for its curved inner stairway reminiscent of a snail. Also known as the Observatory, this tower was used for astronomy its windows were aligned with the four cardinal directions and the position of the setting sun at the equinoxes. 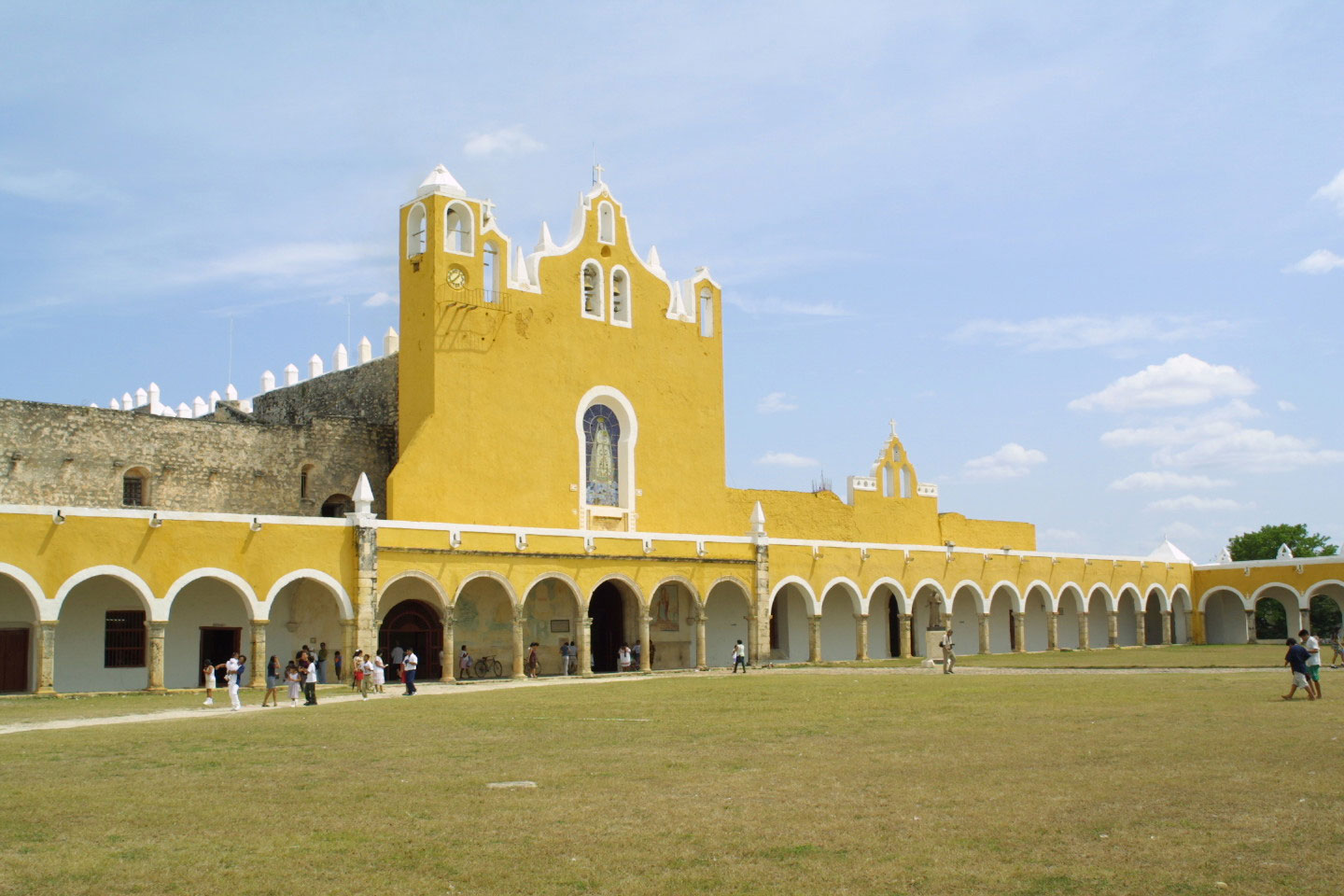