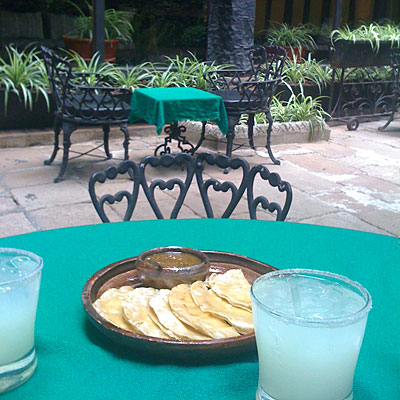 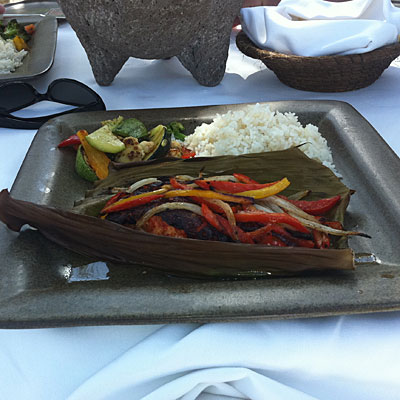 Real Mexican food is quite unlike the dishes found in most Mexican and Tex-Mex restaurants in other countries. In tourist areas you’ll find restaurants with familiar names and gringo menus, though the offerings will often be over-priced and not of a high standard.

If you have a taste for adventure you’ll be well rewarded in Mexico; if not stick to a few simple and traditional dishes that are almost always excellent and not too spicy. You’ll find standards much higher than if you search the menus for something familiar.

Mexican cuisine has some superb rich or spicy dishes, but we recommend that you take it easy for the first few days until your stomach has grown accustomed to its new environment.

Upset stomachs are commonly associated with unpurified water used in ice or used to wash salads and fruit, stressful traveling, or simply bacteria different to those at home. Mexicans also suffer when they travel abroad, and if you stay in Mexico for more than a few weeks you may even experience the same acclimatization disorders when you reach home.

Once you’ve settled down, however, do try some of the regional specialties. It’s all part of the experience, and for many people Mexican food is one of the great attractions of a vacation.

You’ll encounter all of these in your first few days in Mexico:

The staple food of generations of ordinary Mexicans, tortillas can be made of flour (more common in the north) or maize (the traditional method and still the most common in the south). Often served alongside a meal as bread would be, tortillas are also used in many typical dishes – rolled and baked for enchiladas, fried for tacos or grilled for quesadillas.

A good source of protein, beans of different varieties are most commonly boiled and then fried. They can be a main ingredient in a meal or served almost as a garnish.

In general, the bigger the chili, the milder the flavor. Large Poblano chilies are stuffed and served as a main course, the small habanero is ferociously hot. To ask if a dish is spicy, say “es picante?” – though hotel menus will often specify dishes that might offend tourist palates.

Avocado mashed with onions, chilies and cilantro (coriander). Served as a dip or as a garnish.

A salsa is actually just a sauce, although it is most commonly associated with the red or green mix of tomatoes, onion, chili and cilantro (coriander) served on your table as a relish or a dip. Beware of “salsa habanero” in innocuous bottles like small jars of ketchup, and always try just a little salsa first as a precaution.

This infamous spirit is most commonly served to tourists in the form of a margarita – mixed with lime juice in salt-rimmed glasses. It is actually derived from the maguey plant – a spiky bush often seen growing in fields. Mezcal is a cruder form of Tequila traditionally served with a worm in the bottle – the worm should be eaten when the bottle is finished!

Mexican beers are now known all over the world. Corona, Sol and Dos Equis are common brands, usually served cold and a very refreshing alternative to iced drinks.

For more examples, take a look at the sample menus shown in many of our hotel features.

Large Poblano chilies stuffed with cheese or spicy meat (picadillo). The chilies are mild, though the sauce may not be.

Tortillas coated in a tomato and chili sauce, stuffed with vegetables, chicken or pork then folded and baked. Despite the chili content, enchiladas are often fairly mild. Enchiladas suizas are topped with sour cream.

Red Snapper, a common feature on the menus at coastal resorts. Often available “al gusto”, cooked in a choice of methods.

Tortillas stuffed with cheese, folded and grilled. A simple dish often served with beans or a little salad and suitable for those avoiding anything spicy.

A wonderful rich sauce made with the unlikely combination of chocolate, chilies and many spices. It can be red or green depending on the ingredients and the moles of Puebla and Oaxaca are particularly famous, hence “mole poblano” or “mole oaxaqeno”. The sauce is often served over chicken, though turkey is more traditional.

Another of Oaxaca’s specialties, pipian sauce is green and made from pumpkin seeds. It is often served over chicken.

Another Yucatecan specialty, where pork fillet is cooked with tomatoes, onions and spices.

A Yucatecan specialty, not often found outside this region. It traditionally consists of chicken marinated in orange and spices then barbecued in banana leaves.

Tortillas fried until they are crispy and served with various fillings.

Cornmeal paste wrapped in corn or banana husks and often stuffed with chicken, pork or turkey and/or vegetables, then steamed.

Continental breakfast or “American” bacon or ham and eggs are often available. Mexicans often have just coffee and sweet rolls first thing in the morning with a more substantial meal around 11am, but many of the options below could feature on your breakfast menu. Egg dishes are popular and very tasty, often served with beans.

Tortillas stir fried with onions, spices and maybe chicken, topped with cheese and served with a sort of gravy.

Fried eggs on tortillas, covered with a sauce of tomatoes, chilies, peas and ham. Topped with cheese and served with refried beans.

We’d recommend the following as introductions to Mexican food that aren’t too spicy: